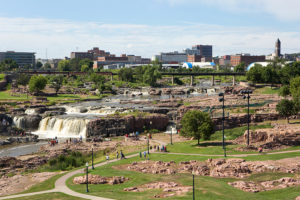 When considering moving to a new city, one of the first things many people do is research what the city has to offer in terms of entertainment and overall activity. Because many want to live somewhere that complements their lifestyle wants and needs, it is understandable that they put so much emphasis on the lifestyles of those who currently live in a prospective city. Sioux Falls has become a destination for those who want to experience the benefits that city life has to offer paired with the slow and relaxing benefits of life in the suburbs.

Sioux Falls is known for its highly-rated school system, low crime activity, attractive and reasonably-priced neighborhoods, and a bounty of entertainment options. For those who work in healthcare, Sioux Falls is a fantastic place to live as Sanford Health is Sioux Falls’ largest employer.

Ranked as the best city in the United States for health care, one of the ten most affordable places to live and one of the 100 best places in the country to live, Sioux Falls is quickly becoming a desirable destination for people of all demographics. Many who make the move note the friendliness and small-town attitudes of Sioux Falls residents as another reason why they decided to take up residence in Sioux Falls.

Sioux Falls’ growing arts scene, often compared to that of New York’s, is another reason why Sioux Falls is worth moving to. Offering live theater, art-house cinema, live music, science exhibits, and art installations, Sioux Falls places a high emphasis on its arts and culture scene. This not only makes life in Sioux Falls eclectic, but it guarantees that there is always something to do and something to experience in the city.

In addition to its arts and culture scene, fitness enthusiasts will find themselves right at home in Sioux Falls. With over 80 parks and over 25 miles of bike trails and walkways, residents of Sioux Falls find that keeping up with an active lifestyle is not only easy, it is enjoyable.

With over 660 eateries and a food scene that has been featured in the New York Times, life in Sioux Falls is nothing short of delicious. Even the pickiest of eaters can find a cuisine that meets their dietary needs in Sioux Falls.

The median home cost in the US is $216,200. While this is not necessarily outrageously expensive, it is much higher than Sioux Falls’ median home cost of $180,100. Without compromising on space, those who live in Sioux Falls are able to enjoy spacious and well-built homes without having to sacrifice or cut back on other living and entertainment expenses; this equates to more money being put back into the local economy and more money for life.

With a population of 170,000 people, Sioux Falls offers its residents the best of both worlds. If you are looking for a city that offers a wide range of activities while still maintaining a small-town mentality, Sioux Falls is the perfect place to call home.